Full Name
Angela Gladue aka Miss Chief Rocka
Job Title
Dancer
Speaker Bio
Angela Miracle Gladue aka Lunacee, is a Cree (nehiyaw)/Greek Interdisciplinary Artist from amiskwacîwâskahikan (ᐊᒥᐢᑿᒌᐚᐢᑲᐦᐃᑲᐣ) and a proud member of Frog Lake First Nation. She started cultural dancing (Metis & Powwow) at age six through her elementary school where she first learned how to perform and continued her dance career as a B-girl/Hip hop Dancer & Youth Mentor since 2003. She was inspired to Break and fell in love with HipHop culture through the influence of members in The Red Power Squad and Magoo Crew in Edmonton during the late 90s and early 2000's who were all Indigenous B-boys/B-girls & HipHop Artists.

Angela has been invited to perform, teach, and speak in countless communities throughout the world and has been touring as one of the lead dancers for A Tribe Called Red since 2016. In 2006 she was selected as 1 of 30 dancers in the world to train in New York with some of the originators, innovators, and pioneers of HipHop Culture through the Red Bull Beat Riders Camp where she really began to study the history and foundation of the culture and dance.

Angela is also a Fashion Designer whose Beadwork was recently featured at A Space Gallery in Toronto, Ontario, in an exhibition called ‘Thunderstruck: Physical Landscapes’ which was also presented at the jagemô Gallery in Ottawa and now belongs in the collection of The Art Bank of Canada. Her newest Beadwork designs have been selected to be featured in an upcoming gallery exhibition tour across Alberta, Canada with the AFA Travelling Exhibition Program (TREX) for the 2021-2022 season. She also was a featured designer at Indigenous Fashion Week Toronto 2020 where she debuted her first Club Wear Collection titled ᐄᐧᒉᐦᑐᐃᐧᐣ - wîcehtowin (Unity) under her independent Miss Chief Rocka Label.

Selected accomplishments include: Choreographing and performing at the 2017 Juno Awards, First Place at the Canadian HipHop Championships and World Hip-Hop Championship Bronze Medalist with her crew the FlyGirlz (Edmonton, AB), and was the recipient of the 2015 Chief David Crowchild Memorial Youth Award for demonstrating outstanding community leadership through HipHop and Powwow dance in the City of Calgary.

She has also opened up for major recording artists such as TLC, Sean Paul, Lil'Kim, Maestro, Grand Master Flash, Busta Rhymes and has performed alongside The Doors, Nelly Furtado, Buffy Sainte Marie, Lido Pimienta, Jeremy Dutcher, and Cris Derksen to name a few. Angela is also an emerging filmmaker and has created several short films and documentaries that have been screened at the ImagiNATIVE Film Festival, Global Visions FIlm Festival, and Dreamspeakers Film Festival.

Her latest work titled "itohtêwin" (Goal of Journey, Destination) was featured at the 2nd Annual Online, Quick + Dirty: A festival of emerging artists and ideas where she was selected as 1 of 8 emerging filmmakers in Alberta to receive mentorship to create the film.

Angela is a proud Mother to her beautiful 3 year old son Cadence (wâpanisimow) who is a tiny tot grass dancer and b-boy in training and loves to spend time with him every moment she gets. 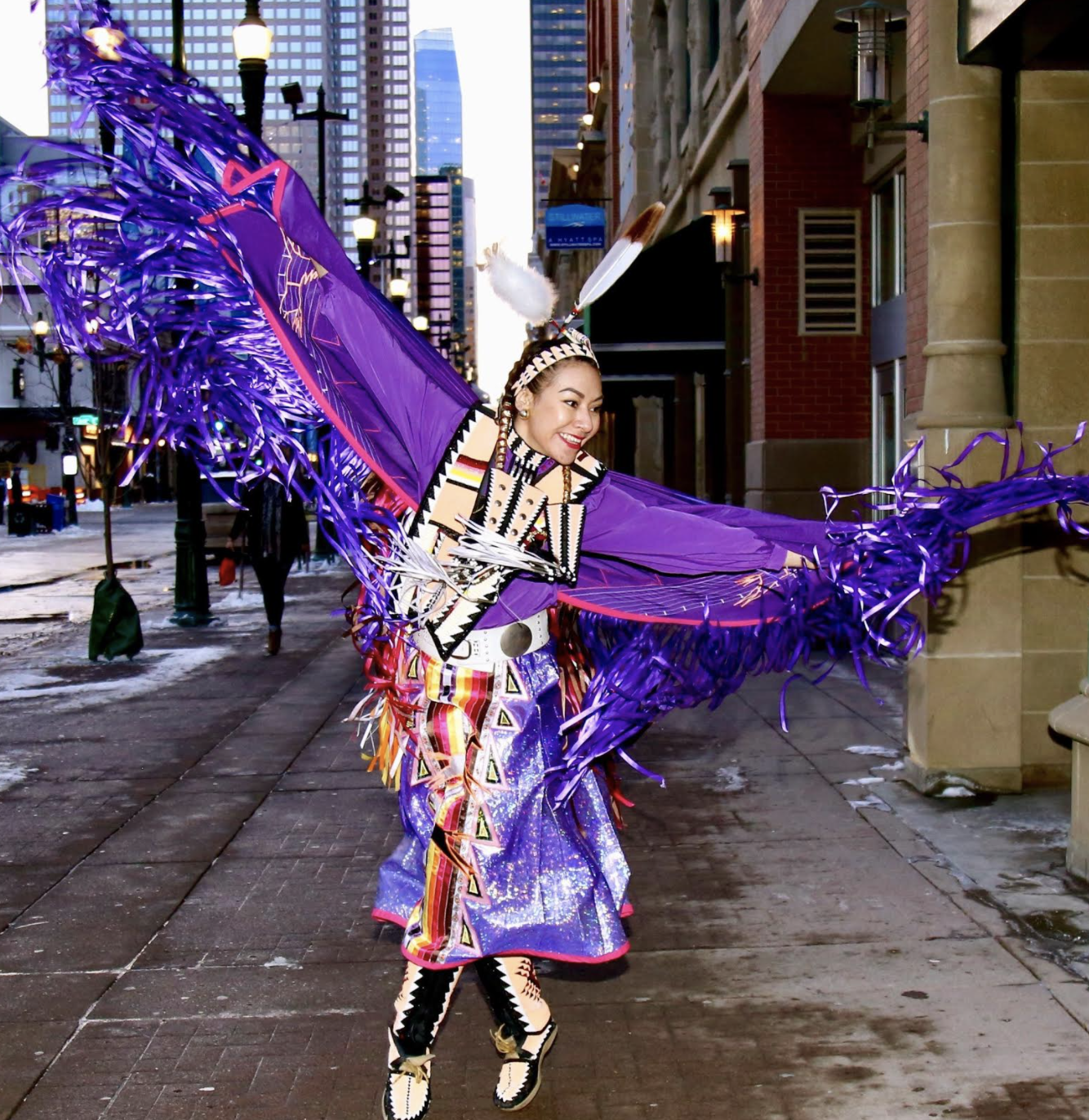